Suffolk based GRP engineering company, Broadwater Mouldings, have been developing a moulding technique to produce high quality finished parts in a fraction of the time it takes for usual methods.

The company has a wide portfolio of moulding processes, but the two most frequently used are closed mould, Low Pressure Press Moulding (LPPM) and Resin Transfer Moulding Light (RTML).  RTML mould tools are relatively low cost as they are produced in house from composite and reinforced with wood and steel frames.  This type of tooling is often referred to as soft tooling.  Production rates can be as high as 4 to 5 parts per day, but are limited by injection times.  The mould tools are held together by vacuum, so if the resin is introduced too quickly, the mould tool can be forced open, resulting in a ruined part, and a considerable clean-up operation. Longer injection times mean that the start of resin curing process has to be delayed, therefore the total curing and demould time is extended.  This in turn limits the number of parts that can be moulded per day or shift, which can be as low as two per shift with large complicated parts.

With LPPM, the process is capable of producing one moulding per hour (eight per shift, twenty four over three shifts) on average, and can be even higher on very simple parts.  The down side of this process is the cost of the tooling, which needs to be either metal, or metals faced.  Metal tools, aluminium or steel depending on the surface quality required, are usually machined from solid billet.  Both of these tooling types are expensive, and can only be justified if the annual volume is high and the product life runs into several years.

With thorough research and development, Broadwater have been able to devise a new method of LPPM by adapting the soft tooling technique from their RTML press.  Vince Mortlock, Technical Director said:

In an ideal world, Broadwater would like to be able to offer LPPM tooling at the same cost as RTML.  I am pleased to say this is now possible.  Development carried out at Broadwater over the last three years has resulted in a tooling solution that offers the customer exactly that.

This newly developed method of LPPM is capable of doubling the production rates of the RTML method, and has all the benefits of the LPPM process; high A surface quality, consistent component thickness, and a high quality smooth B surface.  Vince went on to say:

The production rate isn’t quite one part per hour, as achievable with metal tooling. The process needs to be throttled back slightly to avoid excessive exotherm temperatures inside tool, which would exceed the heat distortion temperature of the tooling materials. We can however achieve a respectable production rate of approximately one part every two hours, or four parts per shift.”

Broadwater have been successfully running two product lines, using this new low-cost tooling and one has been running successfully for almost two years. 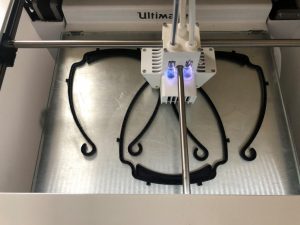 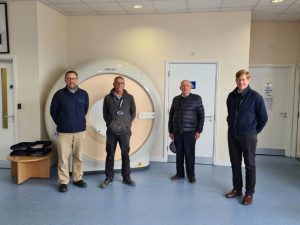